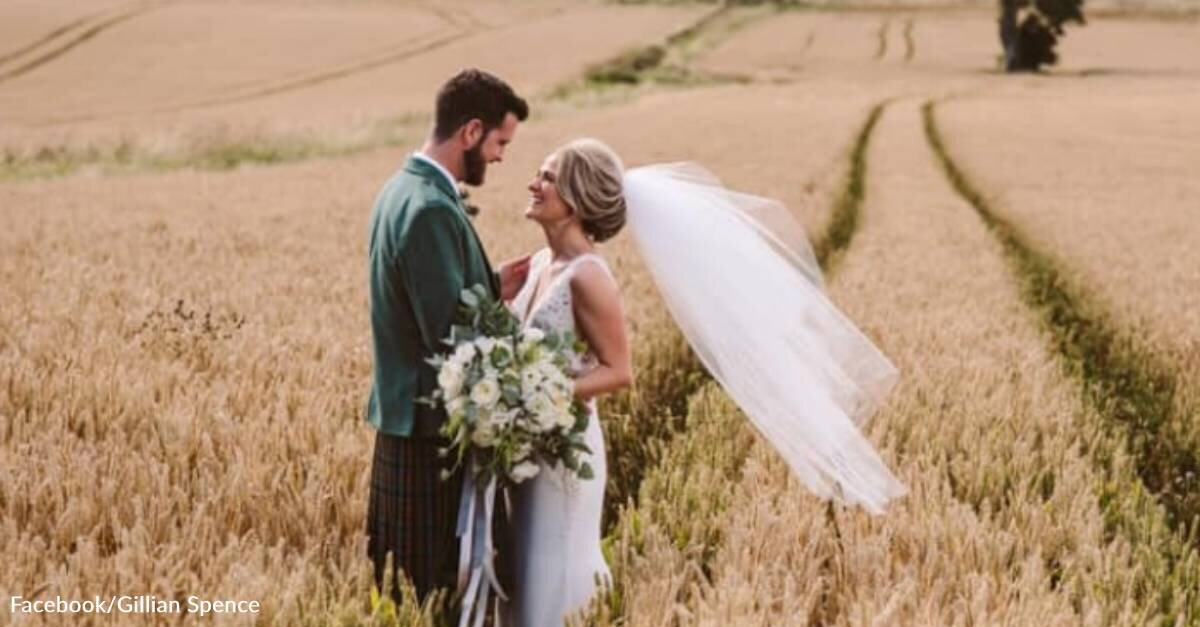 Gillian Spence first noticed a suspicious lump in her chest at one of the most inconvenient possible times. She was just days away from her wedding day. She immediately scheduled an appointment to see her doctor.

“In between fake tan and getting my nails done, I was fitting in MRIs and blood tests,” the 31-year-old recalls.

Gillian received her breast cancer diagnosis just 11 days before her wedding. But she wouldn’t know what kind, how far it had spread, or much else about it until after her wedding day. Gillian was forced to simply put aside her worries until after the big event.

See how we’re making a difference for People, Pets, and the Planet and how you can get involved!

“My husband knew, obviously. His parents knew, my parents and my twin sister knew, but I didn’t want anyone else to find out,” she says. “I wanted to be a bride, and it would have made people feel differently towards me if they’d known. So I was a bride that day, and it wasn’t until I woke up the next morning that I thought, ‘Okay, I’ve got cancer.’”

After her wedding, Gillian learned more about her triple-negative breast cancer diagnosis. She would need surgery, followed by chemotherapy and radiotherapy. This would ensure that any stray tumors the MRI had not caught would also be killed off after the removal of her primary tumor.

“My nodes were clear, and my margins were clear,” explains Gillian. “But because of the type of cancer I had – it’s more aggressive – my consultant decided on chemo for me as part of a buckles-and-braces approach. Then it was onto radiotherapy.”

Gillian also had her eggs frozen and underwent testing for BRCA gene mutations and other cancer-related genes. Her genetic tests came back clear, meaning her likelihood of experiencing a cancer recurrence is smaller than if she’d been positive for one or more of the gene mutations.

Throughout it all, Gillian refused to ask “Why me?” She says it would have been too hard to come back after starting down that road.

“I tried not to blame myself for anything. At the time when I was diagnosed, I’d never been fitter in my life,” she says. “It did and still does play on my mind. Sometimes I think, ‘Was there anything I could have done differently?’

Gillian says she’s had a hard time readjusting to her life with cancer. She’s suffered from nausea, fatigue, hot flashes, and early menopause. She used a cold cap to reduce her risk of losing her hair during chemo, but it didn’t work, which is just a small part of the reason she’s been left feeling not so much like herself. She wore “Winnie the Wig” after losing her hair to help her feel better.

“I just accepted that I was losing my hair and I had a real hair wig made,” Gillian says. “I had it cut and coloured to how I wanted it – this wig, who I called Winnie – was just beautiful. It made me feel like me, it was like a comfort blanket. I think some people didn’t even realise I’d lost my hair.”

After completing treatment, Gillian was advised to shelter in place at home in Aberdeen with her husband, Andrew, and not to see friends and family due to the COVID-19 pandemic. That made things even harder to handle.

“I hugely felt out of control. I think I would have found it easier had life been busy when my treatment ended,” she says. “But life was a bit slow in lockdown and it made my mental recovery harder.”

Gillian is now cancer-free, but getting back to her life after cancer has also proven tough. It has been hard for her to cope with not having the structure of cancer treatment or the support of her healthcare team behind her.

“When I finished treatment, I thought I’d go back to being Gillian. But when people asked how I was doing, it was hard to say I was struggling to navigate that bit, so I’d say I was fine.”

Cancer has changed Gillian’s entire life perspective. It will likely not matter how long she lives cancer-free; cancer will always be in the back of her mind.

“People live in the future – that’s fine. But I don’t do that now,” Gillian says. “I try to be content with what I have. My perspective has hugely changed, and in some ways, I’m happier – I’m very content with what I’ve got. I consider material things a lot less, but I value experiences and time with people more.”

On the whole, Gillian is getting on with her life again and embracing the changes she’s experienced.

“I would say I’ve moved on now, and I’m accepting of how my life has changed,” she says. “Don’t get me wrong though, it’s hard sometimes. Living with the fear of a high cancer recurrence rate within five years is hard. But it’s something I’ve learned – or am learning – to live with. It’s part of me now.”

Congratulations on becoming cancer-free, Gillian! We’re so glad to see you’ve turned this crazy experience into something positive for yourself and wish you all the best!

The Pill Can Spell Trouble for Long QTc
10 Things Diet Soda Does to Your Body If You Drink It Regularly
Confidence tips from an improv comedian
Indoor Masking Needed in Almost 70% of US Counties: CDC Data
How to Avoid Spreading Harmful Chemo Chemicals to Members of Your Household